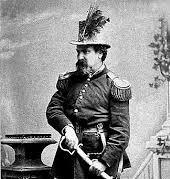 Always a welcoming city, San Francisco hosted the emergence of many colorful characters over the years. One whose history illustrates San Francisco’s tolerance and embrace of the different, the quirky, and the eccentric was English-born Joshua Abraham Norton.

Norton journeyed to San Francisco via South Africa in the mid-1850s. He arrived with some wealth, but lost it in a financial deal gone sour. Shortly thereafter, in 1859, he proclaimed himself Imperial Majesty Emperor Norton I, Emperor of these United States.

As described on a Voice of America broadcast:

Emperor Norton usually did not have any money. But he did not need any. If Emperor Norton went to a restaurant, he was served a meal — free. If he needed something little from a store, that was also freely given. Sometimes he paid with his own kind of money…paper money with his picture on it.

Some stores began placing a small sign in their windows, reading: “By Appointment to His Majesty, Emperor Norton the First.”  Stores with these signs noted that their business increased.

Friends and neighbors glorified Norton’s regal presence, in his self-designed blue and gold uniform. His proclamations were announced in the local press, including his “order” that the US Congress be dissolved by force. His “decrees,” while sometimes compelling in content, had no power in fact. Yet his presence was felt as a strong part of the city’s ethos.

At one point, a group organized an anti-Chinese committee, which set out to foment violence in the city’s Chinese neighborhoods. One night, members of the committee left a meeting and walked toward the area of the city where most of the Chinese lived. As they got close to the area, one man stood in the street blocking their way. He said nothing. He did not move. The mob of troublemakers stopped. They looked at Emperor Norton, standing in his old blue uniform with its gold-colored buttons. They said nothing. They did nothing. Slowly, the mob turned and walked away.

Businesses closed in San Francisco on the day of Emperor Norton’s funeral in 1880, and more than 10,000 people attended his burial ceremony.

By 1900, the population of San Francisco had grown to 342,782, making the city the most populous in California and the ninth most populous city nationwide.

The other five counties in the immediate San Francisco Bay area continued, during the last half of the 19th century, to provide agricultural products to San Francisco and beyond.

Monterey hosted California’s Constitutional Convention. San Jose, at the southern tip of San Francisco Bay, was designated as the first capital of the state of California, but the town did not have the amenities to house delegates, and the capital was quickly moved to Vallejo, and then Benicia, and then, in 1854, to Sacramento.

Paper was produced in Marin (just north of San Francisco), oil wells produced in Santa Clara County for a fifteen-year period, and the city of Oakland, just across the bay, grew to 67,000 by 1900.