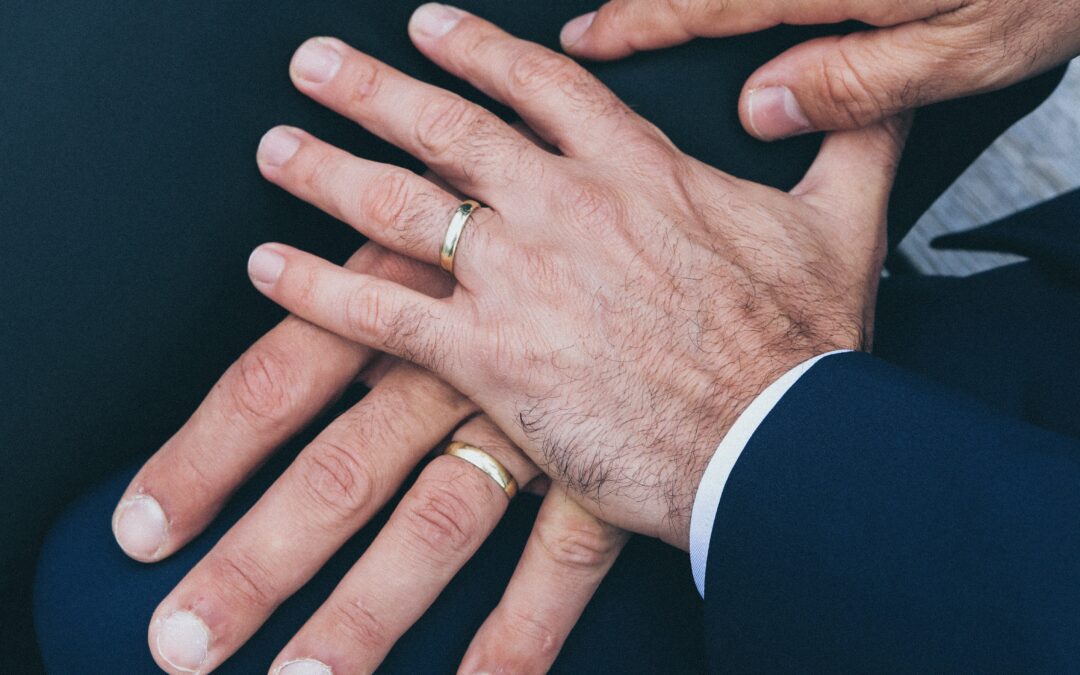 Studies show that most people who identify as gay and lesbian know this at an early age. Our own research supports this: everyone we interviewed said they had feelings of being different or having attraction to the same gender before the age of ten.

Those same-sex couples interviewed for this book grew up in a wide range of rural, suburban, and urban communities with straight parents. Some families were understanding and supportive, but most were not. We look at four people who found their way to acceptance in the San Francisco Bay area LGBT community.

Marvin Burrows has known that he was gay since he was eight years old. He grew up in a rural community outside of Flint, Michigan. His best friend was his male cousin; they confided in each other and compared notes about different boys they knew.

“I knew I was different, a sissy, and the kids at my school treated me differently,” Burrows said. “My cousin met and had experiences with boys, and we would compare boyfriends and stuff.”

His parents began suspecting an odd relationship between Marvin and his cousin and discouraged the friendship between the boys by limiting their communication and visits. Marvin missed his “best friend” cousin’s conversations, and he became more isolated.

Finally, feeling very much alone, Burrows walked from his home to the family barn, tossed a rope around a beam, fashioned a knot, and put his head through the loop.

He jumped off a set of stairs and hung in the air for what seemed like hours. The knot slipped, and Burrows crashed to the floor, choking and gasping for air.

He lay there, staring up at nothing, motionless. Gradually images in the barn became clear. Rafters, stairs, dust balls sharpened into view, and Burrows realized, with regret, he wasn’t dead.

No one came looking for him, so after an hour or so, he dragged himself back into the house, went into his room, and covered himself with the blankets on his bed.

When Burrows’s mother found him, she knew why her son tried to kill himself; she looked into having him committed to an institution but stopped short of going through with it.

“My mother was more accepting than my stepfather. He wouldn’t talk to me,” Burrows said. “They wanted to cure me, so they sent me to a psychiatrist. If it were not for that psychiatrist helping me to accept who I am, I don’t know what kind of life I would have or even if I’d have a life.”

Several years later, Burrows met William Sweenor, who would become his life partner. They knew they needed to leave Flint and live somewhere else that would be more accepting of who they were.

They explored San Francisco and moved to the Bay Area in 1960. Sweenor, who had worked for General Motors in Michigan, transitioned to a supervisory role in a glass-manufacturing plant. Burrows found a sales position, and then worked as a sales manager for a large retail company; he also volunteered at a senior center and for Meals on Wheels.

“I wish all those people who were so critical could see me now. My relationship lasted longer than all their marriages put together,” Burrows said. He and Sweenor had been together for 51 years when Sweenor died in 2002.

Their relationship was like any other couple who are together for a long time, he said.

Discrimination and lack of understanding toward homosexual children continues to be a major cause of suicides and suicide attempts among gay adolescent and teenage children.

Burrows and Sweenor are illustrative of many non-traditional couples who choose to move to the Bay Area in order to find a community where family and personal values are inclusive, where a range of expressions of gender and broad definitions of family are part of the fabric.

The San Francisco Bay Area has earned its reputation for respecting individual rights, individual choices, and the right to live and express one’s own lifestyle without fear of the judgment or constraints of others. Interviews with people from South America, Europe, Asia, and Africa generate consistent descriptions of San Francisco as a “live and let live” society, as a community of individualists, bohemians, and gay rights activists who want to be free to make their own personal choices of friends, partners, and spouses.

Frank Howell left Redbluff, California, a town located 131 miles north of Sacramento in California’s Central Valley, when he was 20 years old, to escape the tyranny of small-town isolation and disapproval. He began to realize he was gay in junior high school, when he wrote a romantic novel about a group of young boys who ran away to live together and form their own family together as lovers. His parents found the novel, and they were alarmed at the nature of book’s content with respect to the male characters’ obvious affection for one another. They took Howell to the Langley Porter Psychiatric Institute at the University of California San Francisco Medical Center to have him evaluated for a psychiatric disorder.

Howell said the psychiatrists tested him extensively with interviews, written preference exams, and image identification. They came up with nothing. “They had no diagnosis and called it off,” he said. His parents took him home and the issue was never discussed again.

They just buried the entire incident, but after a while, they went for counseling as the “parents of a gay child.” His mother remained indifferent, neither hostile nor loving, for a long time. His father, however, was distant and disapproving, telling his son he would be a lonely old man with no friends.

Howell remembers that he didn’t suffer from verbal or physical abuse from other kids or adults. Rather, it was more that no one acknowledged his existence. His parents disapproved of his choices, and the other kids at school locked him out of groups and activities. He felt very much alone in the world.

Two years after he graduated from high school, Howell met his life partner, John Wise. They were together for 25 years, until Wise died in 1998.

After they met and became a couple, the two came to San Francisco for a weekend vacation. They attended a Sunday service at the Glide Memorial Church. “We thought it was amazing and daring that the ministers were counseling with what people called ‘sexual perverts,’” Howell recalled. “Everyone was accepted and respected for who they were, not for who someone else thought they should be.”

They knew they had found where they wanted to settle down. They moved to the Bay Area, where Howell got his master’s degree in library science, and then worked at the Hayward library in Hayward, California, a suburban community 35 miles southeast of San Francisco in the East Bay.

Burrows, Sweenor, Howell, and Wise each wanted to be more than just part of “a gay couple.”

Taking their respective relationships as seriously as any other couple in love, they wanted to make the commitment to each other that is formalized by marriage. It was important to have their bonds recognized by their families and friends, so they planned wedding ceremonies and invited everyone in their lives to join with them in a celebration of their relationship. Although the state or federal governments at the time did not recognize same-sex marriage, it didn’t matter. Each couple wanted a wedding ceremony, legal or not, to tell their communities and the world they were committed to each other for life.

“We matter as a family, just like any other,” said Burrows.

Same-sex couples were seeking the same recognition of their relationships as hetero couples. Legalizing same-sex marriage had become a hotly contested issue all over the country. Finally, on June 26, 2015, the US Supreme Court ruled, in Obergefell v. Hodges, that state-level bans on same-sex marriage are unconstitutional. The court ruled that the denial of marriage licenses to same-sex couples and the refusal to recognize those marriages performed in other jurisdictions violates the “due process” and the “equal protection” clauses of the 14th Amendment of the US Constitution.

The ruling overturned a 1972 precedent, Baker v. Nelson. Just prior to the Supreme Court’s ruling in 2015, some form of same-sex marriage or domestic partnership had become legal in 38 US jurisdictions.

Before the ruling, California law sought to give registered domestic partners the same responsibilities and rights as married couples. Federal law, however, did not. Committed same-sex couples were not eligible for Social Security benefits, immigration privileges, or the marriage exemptions allowed in federal estate, transfer, or gift taxes.

Newsom made the decision to allow the full rights of marriage after hearing President Bush oppose it during his State of the Union Address on January 20, 2004. At that time, as has been noted, Pew Research Center polling showed that Americans opposed same-sex marriage by a margin of 60% to 31%.

Previously, gay and lesbian couples had been able to register as domestic partners in California. Couples who registered were eligible for many of the same state rights as heterosexual married couples, but only in the state of California. The rights of civil unions did not transfer from state to state as marriage does.

Of the 1,138 federal rights that came with marriage, but were not extended to gay couples, one of the most devastating to gay couples was the loss of a survivor’s spousal rights when one member of the couple died.

Bill Sweenor died from a heart attack after the couple had lived together for 51 years, had bought a home together, and had shared all of the things that any longtime married couple does. Marvin Burrows was treated by the system as nothing more than a casual friend. He lost the health insurance he’d had as Bill’s domestic partner, and he was denied Sweenor’s spousal pension and Social Security benefit.

Burrows could not afford the mortgage on the home they had lived in for 30 years, and his own Social Security payment would barely cover his new health insurance costs, leaving nothing for food and housing. In one week, Burrows lost the love of his life and was facing homelessness.

Several years later, the union changed their policy to treat survivors of same-sex domestic partnerships the same as married survivors.

Burrows also encountered a problem at the mortuary where Sweenor’s body was sent: they would not cremate him at Burrow’s request, refusing to accept domestic partner Burrows as the next of kin legally entitled to make such decisions. Burrows had to have Sweenor’s body moved to another, more accepting, crematorium.

Other frequent insults and indignities for same-sex couples occurred when a partner in a long-term gay relationship would be refused visitation at hospitals by previously distant and disapproving family members, who swooped in and excluded the mates from being with their dying loved ones, and then raided the assets left behind as well.

Same-sex marriage is a civil rights issue. In the words of Theodore B. Olson, quoted from a Newsweek article:

Legalizing same-sex marriage would also be a recognition of basic American principles, and would represent the culmination of our nation’s commitment to equal rights.

Olsen, who had served as US solicitor general under President George W. Bush, wrote that marriage is a civil issue, not a religious one, that it represents a civil contract between people, just as in business. As he stressed, whether a religion condones same-sex marriage or not, religion is not the law of the land and has no place in regulating a civil contract that is recognized for most of its citizens.

Olson, a political conservative, also declared: “Same-sex marriage is the last major civil-rights milestone yet to be surpassed in our two-century struggle to attain the goals we set for this nation at its formation.”

Fortunately, the law eventually changed, and equality for all is now the law of the land and the center of our political and legal convictions. Whether a person is a liberal or a conservative, these civil rights began as the revolutionary concept that our nation was founded upon.